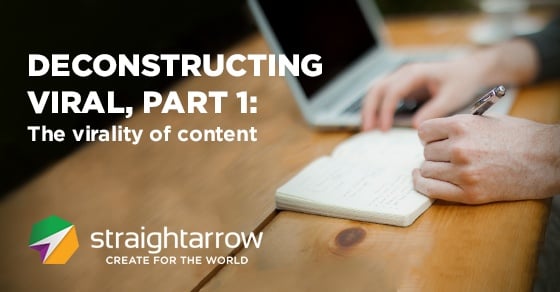 DECONSTRUCTING VIRAL is a two-part blog series that aims to analyze viral campaigns in social media. This installment talks about which types of posts appeal to majority of users.

Remember how ‘The Dress’ that broke the Internet a few months back led to a global discussion of whether its color was blue-black or white-gold? Who could have predicted that a simple photo of a dress would spread like wildfire and become “viral?”

Being viral is not necessarily alarming in the age of Internet and mobile usage; it can mean your posts are the talk of the town. But what determines virality? Your budget? Prayer? Luck? There must be some form of art to it. We’ve taken the time to examine virality by approaching two creative aspects: content and concept.

With an estimated 2.46 billion active social users, it’s virtually impossible to attract everyone’s attention or get your message across to each and every person online. Thus, identifying your goals and creating interesting content are crucial to making a post go viral.

Do you want to increase sales, promote a brand, raise awareness towards an issue, or simply express yourself? These goals will help you determine which concept and tone your material should go with as the backbone of your viral campaigns. They also help you choose which type of content will be best for what you plan on sharing. Take a look at these examples below:

Videos are known to carry visual and emotional appeal for many people because of how interactive the viewing experience can be. Online audiences find it especially easy to relate to short films, commercials, and blogs that are either notably funny, romantic, or dramatic.

Often, videos are used by companies who want to promote products while influencing the lifestyle, ideas and opinions of their target audience. One example is the Christmas Miracle video by Westjet, where Westjet flyers are shown receiving gifts upon arrival at the airport. These flyers went through a rollercoaster of emotions while getting their gifts, as these were the exact things they wished for during the Christmas season. It didn’t take long before the timely video became a viral hit by itself.

Videos are also a great platform for expressing oneself. Remember the man who got stranded in a Las Vegas airport and made a music video parody of “All By Myself?” Well, he was a hit because of his guts, his talent, and his creative way of killing boredom. His video even went as far as catching the attention of the song’s original singer, Celine Dion.

For a more succinct experience, you can try Vines as trendy ways of sharing. These are short, easily-digestible clips of people featuring either snippets of their day or clips edited to maximize comic effect. The wittiest and funniest Vines are most likely to become viral after being shared from the original website to other social platforms (including YouTube, when fans decide to compile Vines into hour-long streams).

With the rise of Instagram and more image-oriented posts on Facebook, photo sharing has become as instant as sending a text message for those with smartphones in their hands. Aside from being easy to create and upload, pictures are very easy to share because they usually come pre-loaded on different social feeds once users log on.

Are you familiar with the Filipino celebrity who became a viral hit because of his unbelievable make-up transformations of famous personalities? We think Paolo Ballesteros’ success can be attributed to his use of a recognizable format – a before and after photo put together in a collage – as well as how frequent and consistent his posts were.

In the same manner, internet “memes” or online posters of shared ideas and sentiments are photo formats that continue to gain much attention from users on social platforms. A funny photo of a person or an animal becomes a meme when an openly relatable caption makes the photo fun to use or adapt for a variety of personal experiences.

If you think blogs can’t reach viral success, think again. Take a cue from Humans of New York, whose blog started as a collection of portraits of random New Yorkers.

Brandon Stanton started his blog in Tumblr with random portraits, not anticipating the viral effect of his photos to the lives of many people. Each photo has a caption that shares a story about the subject of the portrait. This content gradually gained fame, and now social media users are actively sharing random photographs from Humans of New York simply because they can relate to the subject.

Blogs like Humans of New York are easy to sympathize with and engaging enough to finish, making the written output as open to become viral as any other visual format. To date, people still look forward to Stanton’s newer posts of real people with real stories living in New York.

To become a viral sensation, creatives need to be wary of how their audiences consume their posts, and whether the formats they use are the right fit for what they plan on sharing. Audiences need to reach a level of familiarity with your posts before they decide on sharing them, so make sure to create output that’s recognizable – whether it’s because of their format or because of the message behind them.

Stay tuned for the second part of this blog series, which covers the creative thought process behind some of the successful viral concepts in social media.

is a Social Media Specialist at StraightArrow Corporation. She's a Star Wars geek with a penchant for both movies and travelling.