DECONSTRUCTING VIRAL Part 2: How to Become a Viral Success on Social Media 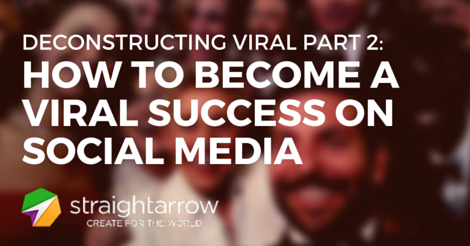 Viral campaign content on social media tends to come in various types, depending on the message you want to send to your audience. In the first part of the DECONSTRUCTING VIRAL series, we talked about what makes content go viral on social media, as well as which types of content appeal to online communities.

Now that you have created compelling content, the next step is to determine how to pull it off. How do you grab your audience’s attention? How can you encourage them to share it with the rest of their network?

How to become “viral”

Let’s take a look at a few examples of successful viral campaigns – these examples focus on videos, but as mentioned earlier, any type of content has the potential to become viral.

Blendtec’s “Will It Blend?” series was launched in 2006 and in just five days, the videos had more than six million views — as of today, the video has been viewed over 17 million times. Can a simple demo video of a blender truly be that compelling? Well, not really. A blender that blends markers, glow sticks, and iPhones, on the other hand, is quite an awesome (and sometimes cringe-worthy) sight.

Will It Blend? videos are entertaining to the point of “corporate hypnosis” (which leads to the actual purchase of the product). Unlike traditional demo videos that feature hard-sell advertising, Blendtec’s videos are unique and surprising. The videos feature someone who could be called a “blender expert” - Blendtec founder Tom Dickinson - as he tries to blend all sorts of objects, tools and gadgets to prove the durability of the product. Thus, the videos appear to be more reliable compared to ‘normal’ product demos that feature models who don’t even have a good grasp of the product they’re selling.

Dove has been a leader in women empowerment for quite some time, and their campaigns are undeniably spot-on. “Real Beauty Sketches” is one of the most successful viral campaigns of all time, gaining over 114 million views and 3.8 million shares within its first month. (As of today, it has over 66 million views.)

The campaign features an FBI-trained forensic artist who was tasked to draw portraits of random strangers based on the way they looked at themselves and how strangers see them. Eventually, the artist would reveal his sketches, showing two distinctly different portraits every time.

Dove uses social experiment campaigns to raise awareness on the value of natural beauty and self-confidence — marketing efforts that are emotionally appealing to a lot of women today.

The video has 2,443,563,416 views as of this writing - and I’m pretty sure that the majority of the people who have seen the video didn’t understand a word and had to Google what (or where) Gangnam is.

How did it go viral, then? At first, it may seem like nothing more than a simple music video of a random dude in a colorful suit, but it somehow turned out to be so funny and infectious that even the toughest soldiers and the most uptight NASA employees created parodies of it. The song is catchy, its melody is energetic and the video is quirky - ingredients that helped it become an instant internet hit.

Picture this: You’re riding the train quietly when suddenly, a group of strangers started singing a familiar song that brought back plenty of your childhood memories. This is exactly what happened on June 28, 2014 – the entire Broadway cast of The Lion King took over an NYC subway car, surprising a bunch of riders.

Was it spontaneous? Maybe. Was it staged? Maybe. But the thing is, it took us by storm and everyone who saw the video instantly shared it with their network.

A well-thought concept is nothing without the right tone and delivery. If it’s emotionally appealing to one person, it is likely that his social circle will be influenced as well. This is how “digitally interconnected” we are today.

But wait, we’re not done yet! Here’s a handy feature on many social media platforms that contributes greatly to the virality of your content – the all-important hashtag.

A single symbol has the power to increase awareness on one topic: the octothorpe, more commonly known as the pound sign or hashtag. They were first used on Twitter to track discussions, but eventually became a feature on other platforms as well. There are two reasons behind the use of hashtags: either to set a trend or promote an advocacy.

Ellen DeGeneres struck gold with the #OscarSelfie hashtag when she posted a selfie with Hollywood A-listers. It became viral, and the concept was even copied by thousands of people.

Advocate groups and charities also use hashtags to increase awareness about a specific cause. Two of the most famous ones are #NoMakeUpSelfie for breast cancer awareness and #ALSIceBucketChallenge to raise funds for ALS research. These became such hits that even famous businessmen and celebrities joined in.

Viral hashtags have become mainstream, as they are the result of “repetition and interaction of influences.” Breaking the internet may happen overnight, but the development of compelling content cannot. It requires creativity and intelligent conceptualization – and even spontaneity – because of one simple rule: “Social is not given, it is made.” Don’t forget to consider the impact of your content — if it doesn’t make you laugh or cry or even think hard about something, then how could others feel the same way?

Best of luck with your social media campaign!

Master the art of social media marketing with us! Join our fun team of Social Media Marketing Specialists.

is a Social Media Specialist at StraightArrow Corporation. She's a Star Wars geek with a penchant for both movies and travelling.