There’s been growing interest in content decentralisation in recent years, with brands scrambling for attention on old, increasingly saturated channels. With each year, there come new platforms, which marketers can bend to their ends, or new ideas on taking old platforms and drumming up interest on them. What remains the same is the question: which digital marketing platforms are poised to rule the year?

On the surface, it appears it is still, or perhaps once again, the “Year of Video.” Nearly half of all marketers that responded to HubSpot’s worldwide State of Inbound 2017 survey indicated plans to add YouTube to their content strategy with several more planning to add other video channels. 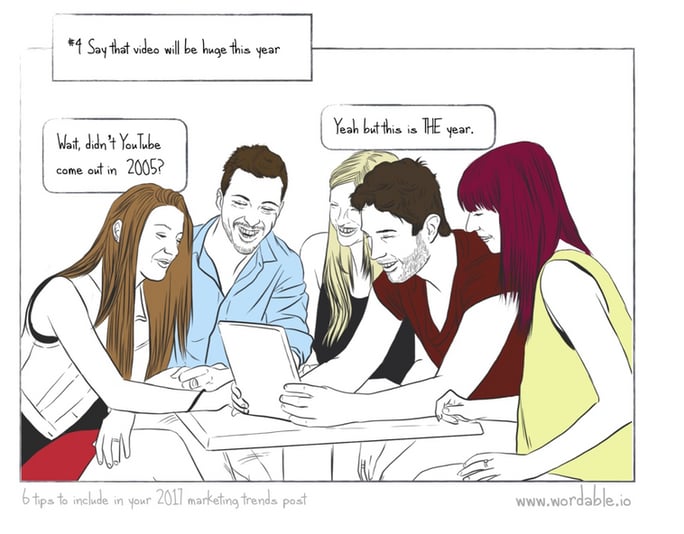 However, for marketers looking to avoid stiff competition and instead reap the bounty of early adoption, it might be the year of everything-except-video. So while we can’t write video off, however cliche it has become, we can at least consider other channels often overlooked. Messaging, for instance, is an increasingly appealing choice to marketers, while podcasts and audio media, while largely overlooked, show significant promise.

Video: Let’s just get this out of the way

Nearly half of all marketers surveyed in HubSpot’s State of Inbound 2017, a worldwide study of marketing trends, indicated plans of adding a major video-sharing platform to their content distribution strategy. Leading the pack was YouTube at 48%, (holding steady from last year’s survey), followed by Facebook video at 46% (up seven percentage points from last year) and Instagram at 37% (up four percentage points).

Oddly enough, Snapchat trailed in the polls with only 10% of marketers planning to adopt it (down three percentage points from last year), despite both Facebook and Instagram copying its signature vanishing content (Facebook’s “days” and Instagram’s “stories”).

The blatant ripoff may have earned the Zuckerberg company a lot of backlash—inspiring a new meme, too—but despite the callouts, at least one copycat succeeded: Instagram’s stories outpaced Snapchat in terms of daily active users.

The upward trend thus makes sense for Facebook and Instagram: they may be shameless hacks, but they have versatility and breadth of user base on their side. YouTube will likely hold steady until it can capitalise on a similar trend. For now, we can rest easy knowing at least YouTube doesn’t have stories.

Messaging apps are the most popular choice following video, with 24% of marketers planning to add them to their repertoire (up four percentage points from 2016). It’s worth noting that there’s more excitement about this among executives (32%) than rank-and-file marketing contributors (20%).

And if those contributors aren’t already steamrolled by the higher-ups, their reticence is undermined by the looming spectre of automation. With increasingly sophisticated machine learning and AI, it probably won’t be long before chatbots take over lead nurturing and customer engagement on messaging apps.

Only 11% of marketers have plans for podcasting, down by four percentage points from the previous year. And is it so surprising that in an industry that so often touts visuals, a purely auditory format is overlooked?

The case for auditory content, however, comes from another industry: publishing. Audiobooks may be making a pittance compared to other formats—$240 million against the $1.8 billion of hardcover, for instance—but they are seeing rapid growth. In 2015, the number of audiobooks published increased by 37%.

Perhaps the strongest case for audiobooks is that they appeal to a contemporary obsession with productivity—audio content can easily be engaged with alongside other tasks like driving, cooking, exercising, or working.

Or, for the truly extreme, while reading another book.

Even without an audience’s neurotic need to constantly consume information, there are good reasons to recommend audio formats.

For one thing, they can easily be repurposed for or from other formats. Take a video of an interview, for example, and you can extract its audio for a podcast. You could then use the transcript of that podcast to write a quick blog. Alternatively, you could produce original audio content and develop animations to match.

Audio content is also fairly flexible in terms of distribution. There are quite a few podcast directories and aggregators out there on which to list your content. And if your team finds it a bit much to produce an entire podcast, there’s always the option of placing ads on established syndications, or even tapping a podcast to do some influencer marketing for your brand.

But when the platforms diverge in the yellow wood, which one should you take? As renegade readings of Robert Frost’s poem argue, the supposedly obvious choices may not be so obvious after all.

Ultimately, a brand’s success depends more on their audience’s presence in a certain channel than their own. The safety of numbers suggests that large platforms will continue to grow larger, while small ones face an uphill battle—so right now, at least, you’re probably better off on Instagram than Snapchat, for instance.

But problems might arise in writing off certain platforms before even checking if your could-be customers might be using them. When aiming for the early adopter advantage, choose those less-travelled roads that are steadily gaining more traffic, like audio books, and those with significant developments on the horizon, like messaging apps and chatbots.

For a closer look at the which platforms are more travelled or less, download the full State of Inbound report:

is a content marketing specialist for StraightArrow Corporation with a penchant for video and tabletop games. Sometimes wanders, but isn’t quite lost.